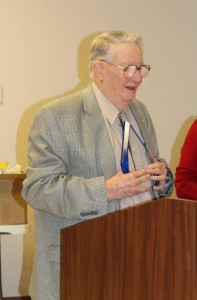 In keeping with its purpose—to promote and improve the horse industry in Virginia– the Virginia Horse Council  established an Annual Awards Program. This program is designed to recognize the contributions of all who work diligently to promote and protect the equine industry in the Commonwealth. The Council is a not-for-profit organization formed by horsemen for Virginia horsemen, and the membership and Board of Directors represent all breeds and interests. The VHC hopes to reflect this diversity in the awards program as well.

The VHC encourages you to review the various categories of awards and nominate individuals and groups whom you feel are outstanding representatives of the industry and who work to advance the Virginia horse industry. Awards will be given at the VHC Annual Meeting  held each March. If you have questions, contact one of the VHC Awards Committee members, listed at the bottom of the Nomination Form. We hope you will participate and nominate a group, individual, or business (see the various categories) for a VHC Award!

Sue Alvis presented the following awards on behalf of the Virginia Horse Council:

Sue Alvis and Nancy Paschall presented the following awards on behalf of the Virginia Horse Council: 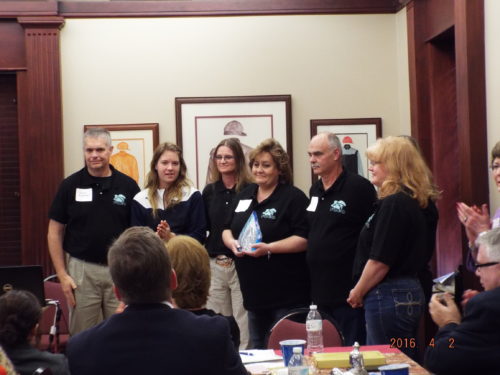 safe and positive equestrian opportunities for riders of all ages.  They are strong supporters of local young equestrians, providing volunteers to therapeutic riding programs and creating facilities and classes at shows for handicapped riders and offering a variety of horsemanship information for multiple disciplines.  They have been instrumental in fostering a positive relationship between the horse industry and local government and private landowners.  The club encourages and reinforces equine safety  through social media, monthly meetings, and educational events.  In a world where many people seem to have forgotten that horses are fun, this club accentuates the fun in the horse industry. 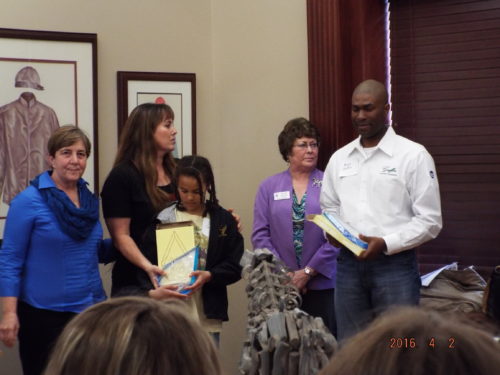 The award for Horseman/Horsewoman of the year went to Bruce and Staci Griffin.  This couple exemplifies the American Dream.  They brought this dream to Virginia and have become a part of the horse community/industry on a local, state, national and international level.  In addition to training the 2014 USEF National Horse of the Year, Elis GV, Bruce and Staci also have well over three hundred national and world titles with the International Friesian Show Horse Association.  Bruce is the only person to be named a USEF Equestrian of Honor for three consecutive years and the only person to win the organization’s Norm K. Dunn Excellence in Handling Award two years in a row.  With all of this, they still  find time to take their horses to local vacation Bible schools, local nursing homes and ag education days across the state. 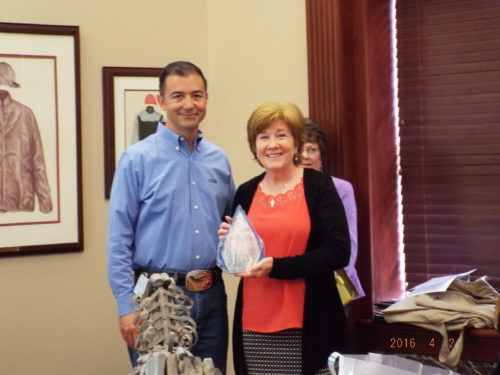 Bette Brand received our Industry Service Award.  Bette has spent a career spanning more than 30 years serving the agricultural community. Bette was educated at Pamplin College of Business and Va Tech. Bette is currently a chief sales officer with Farm Credit of the Virginias. She has been a tireless advocate for agriculture and rural communities at the local, state and national level. In addition to her work with the Virginia Horse Council Bette has served on the Board of Directors of the Virginia Agribusiness Council, the Virginia Cooperative Council, the Virginia Foundation for Ag in the Classroom, and the Ag Advisory Board at Va Tech.  She also served as the VHC president from 1988 to 1990.  Bette is a take charge person, with strong organizational skills who tackles projects with energy and enthusiasm.  For a number of years Bette has served as the chairperson of the Legislative Issues committee for the VHC. Bette’s strong interpersonal skills have served her well in dealing with legislators at both the state and national level. In her role as committee chair Bette monitored legislation, marshalled support both for and against legislation and lead the VHC delegation in their annual visit to the Virginia General Assembly.

Joe Elton received the award for Trails Development.  During Joe’s twenty years as the Director of Virginia State Parks and in his present role as the Deputy Director of Operations for the Department of Conservation and Recreation, he has supported the Horse Industry  by helping to reopen state park trails to horse use, advocated for the inclusion of 6 horse camps resulting in the opening of camps at Douthat State Park, Fairy Stone State Park, James River State Park, Occoneechee State Park, Pocahontas State Park and Staunton River State Park.  He has always been available for VHC board meetings, educational programs and local programs.  Joe has help with numerous Legislative Trail Rides held in state parks by securing the site and making his staff available for interpretive programs  and helping to keep things running smoothly behind the scenes.  Joe is the sixth person since 1936 to serve as Virginia’s State Park Director  He has worked for six governors since his appointment in 1994 and has overseen the most dynamic period of growth and development in VSP history.  He has opened six new parks and is working on the planning and development of five more.  Today, he oversees 6 operating State Parks representing over 70,000 acres with more than 600 miles of trails.  Joe was honored in 2007 with the Distinguished Service Award by the National Association of State Park Directors in addition to many other industry service awards. 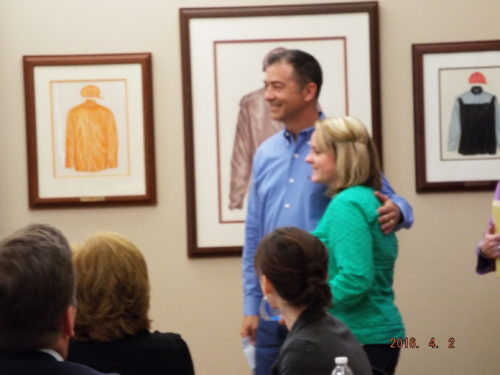 Volunteer of the Year

The Volunteer of the Year award went to Randi Zahm.  Randi accepted the Virginia Paint Horse Club’s Futurity Chairperson in 2011.  Since

then, her management of VPHC futurity programs has resulted in increased participation and significant growth in cash incentives for breeders, trainers and exhibitors.  Participation in the Stallion Service Sale and the resulting Breeder’s Futurity Program increased 112% resulting in 2015’s payout being in excess of $30,000.00, with an overall payout since 2011 of more than $100,000.00.  Her aggressive marketing plan and enthusiasm has attracted breeders from as far away as California and Texas.  This explosive growth and outreach has positively impacted the Virginia Horse Industry and increased the quality of the Paint Horse breeding in Virginia while also providing additional opportunities for Virginia breeders, trainers and competitors. 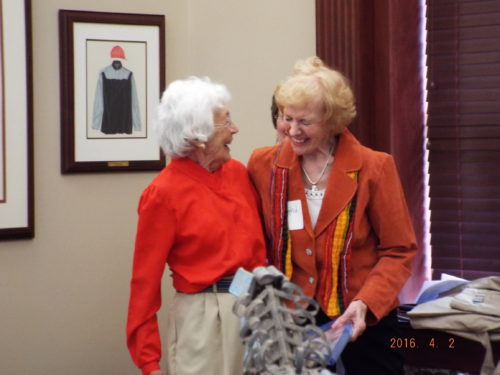 Andrea has been actively involved in the promotion of Virginia’s horse industry for the past 25 years. She was instrumental in the creation of

the Virginia Horse Industry Development & Promotional Fund. Andrea managed the process to collect and analyze data from more than 44,000 coggins tests that enabled the successful Coggins Test Referendum of 1994 which established financial support for creation of the 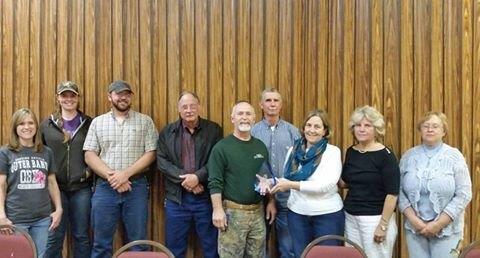 The Southeastern Farrier’s and Horseowners Assoc received the award for Equine Group.  The Southeastern Farriers and Horseowners Association (SEFHA) is a regional all-breed, all-discipline horse association established to unite farriers, horse owners and veterinarians for the furtherance of the knowledge and enjoyment of horses.   SEFHA hosts educational clinics, trail rides, fun shows and other events to allow members and the public learn about and enjoy horses 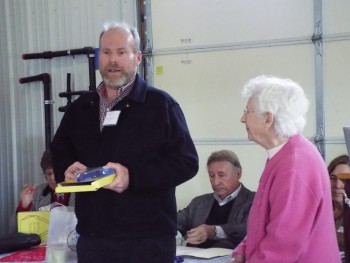 Dr. Herbert Howard recieved the Industry Service Award posthumously.  Instrumental in establishing the Marion DuPont Scott Equine Medical Center in Leesburg, Dr. Howard not only helpe find financial support for the EMC building but also recruited private donors to invest in equipment for the facility.  Over the years he mentored, employed and gave a leg up to many young vets as they began their careers.  During 2nd World War Dr. Howard was stationed in Italy and had over 5,000 horses & mules under his care. Dr. Howard lived and practiced out of Loudoun County, and passed away Nov 5, 2014.

Vet of the Year Award 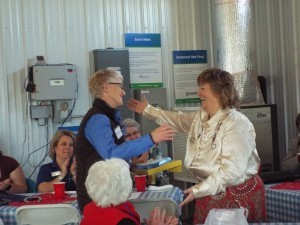 Melinda Freckleton, DVM recieved the Vet of the Year award.
Dr. Freckleton worked on AAEP taskforce to help pass Virginia’s Equine Dentisty Laws.  Her current area of research will focus on PPID (aka Cushings), specifically in horses used in therapeutic riding in VA.   She has authored multiple articles in various horse magazines and is a consulting and contributing vet for Equus magazine.   Dr Freckleton was the presentor at the 2014 PATH Internation Conference in San Diego. 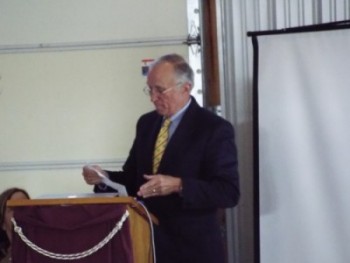 Charles Conner received the Industry Support Award.  Mr. Conner is the State Park Manager at Douthat State Park and was a Key player in providing an enjoyable trail riding experience for the 2013 VHC Legislative Trail Ride.   Mr. Conner works hard to keep horse trails usable and erosion free.   The individual who nominated Charles describes him thus – “No matter what line of work a person happens to be in, happy people have enthusiasm and are great leaders with their fellow workers” 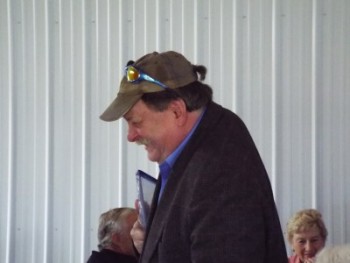 Robert Belch recieved the Industry Service Award.  Mr. Belch is a familiar figure at the cooker/grill at various horse activities
around Virginia. Mr. Belch has a background in North Carolina BBQ cooking and has cooked at numerious VHC Legislative Trail Rides , at VQHA, and Keswick Hunt Club events. Mr. Belch donates his time to these events only asking to be reimbursed for expenses. 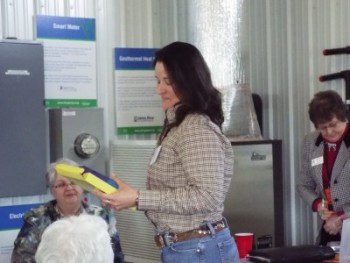 Kim Bernop received the Trails Award.  Ms. Bernop is a professional farrier and a graduate of Va Tech. She is President of the SouthEastern Assoc of Trailriders (SEAT) amd trail committee chair for the Virginia Paint Horse Club. When needed Ms. Bernop was instrumental in organizing and coordinating volunteer efforts to improve and clean up existing trails and utilized her influence in the trail riding community to promote trail etiquette, trail conservaiton, trail safety and responsible horse ownership.

Horseman and Horsewoman of the Year Award 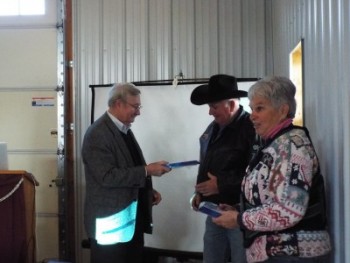 David Lamb & Sally Lamb received the Horseman and Horsewoman of the Year Award.  For thirty years, the Lambs have owned Oakland Height Farm in Gordonsville. They regularly produce and promote a wide variety of activities related to the horse industry which include but are not limited to lessons, training, trail rides, sales and exports of horses and even the production of bull ridings. Legions of young people have passed through Oakland Heights with an education in riding instruction, safety, horse care and responsible living. For 25+ years they have have provided horses for the VHC Legislative Trail Ride and have even provided horses for the Presidential Inagural Parades.